You know the difference between a “Salty Dog” and a “Greyhound”?  My friend Harriet would think this question is a lay-up.  A greyhound is vodka and grapefruit juice, but a salty dog is gin and grapefruit juice served in a salt rimmed cocktail glass.  Now that we got that straight we can move on to the title question of this blog:  When is a Salty Dog not a Salty Dog?  Well, when it’s a compilation and not the original LP.

This LP was given to me by my good friend J.D. from San Francisco, CA.  It came to me in the following FedEx box:

FedEx envelope containing my copy of "A Salty Dog"

The profanity on the FedEx box is a inside joke that I share with J.D.’s family. When J.D. was in high school his Dad,who is my very close friend “Chip”; took him to see Green Day at an outdoor venue here in the Dallas Ft. Worth area. Amid the pushing throng of teenagers my Buddy ran into a young teen-aged girl. She turned around and yelled at Chip:   “F*#% YOU, OLD MAN!”. It’s been a running joke ever since.  (Check out my blog from September 2011 at the ACL Festival in Austin Texas and you can see pictures of “Chip” in his F%&# You Old Man T-Shirt that my wife made him for the concert!) Needless to say I was very interested in what the envelope contained, but I waited till Christmas Day to open it anyway.  When I finally opened the gift I was really blown away by what a cool gift J.D. had sent my way.  It was a copy of an LP by Procol Harum called “A Salty Dog”.  Here are some pictures of the LP:

I knew Procol Harum had released a great LP called “A Salty Dog” but it had been so long since I had seen or heard this record that I couldn’t remember what it looked like. My memory was good enough to recall that this was not the cover I thought it would have. I noticed that the LP had 6 songs on each side instead of 5 songs. U.S. LP’s always had 5 songs on each side and European LP’s had 6, so i concluded that it must be the English import version of the album. In addition, this mystery LP was also on a Label I didn’t recognize as well. Here is a picture of the record label:

Record Label of "A Salty Dog" by Procol Harum

This record was released on MFP records sometime in the very early 1970’s. MFP turned out to be a subsidiary of EMI records. The disc was a English import after all. Very cool! But the “Salty Dog” turned out not to be THE “Salty Dog”. Here is the album cover to the original LP by Procol Harum called “A Salty Dog”: 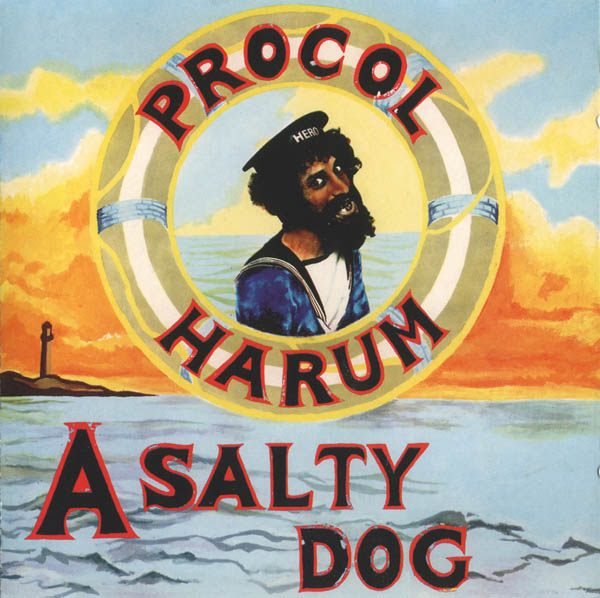 Original Album cover of "A Salty Dog" by Procol Harum

So here’s what I discovered: The LP I was given was a “Best Of…” compilation that was released sometime between 1970 and 1972. It was released to capitalize on the enormous success of their best known song, “A Whiter Shade of Pale”. It just happened to have the same title as one of the early LP’s of Procol Harum. “A Salty Dog” was also one of their better known songs. It is interesting that not even Procol Harum’s own web site knew exactly when this compilation was done. After doing much research on these two records that have the same name, I’ve come to the conclusion that this compilation LP is much more rare than the original LP.  There is an interesting comment on the back of my LP I will quote in it’s entirety:

“It would be impossible to write about Procol Harum without mentioning A Whiter Shade of Pale.  This was a song with a distinct Bach flavour to it which was undoubtedly the making  of the band as far as wide public recognition was concerned.  It also had its drawbacks, however, in that many people identified them by this sound and expected all their music to be in the same vein.

The group’s follow-up to Whiter Shade was Homburg, which was also a Top Ten hit.  Like all the tracks on this record it was written by Keith Reid who is a talented original and much under-rated lyricist.  Listen to the broad selection of titles on this album, which features pianist/vocalist Gary Brooker, and you will soon realize that Procol Harum has progressed far beyond the style of A Whiter Shade of Pale.”

So let’s give it a listen and see what you think.  By the way all of these songs are from the earliest period of Procol Harum so all the lead guitar work is by the great English guitarist Robin Trower.

It is interesting that the quote is trying to distance the band from that Whiter Shade of Pale sound but this follow-up song has exactly the same sound and feel as it’s much more famous Big Brother.  The dominating organ sound, the cryptic lyrics(“…you better take of your Homburg because your overcoat’s too long”), the pace all sound very Shade of Pale like.  By the way a Homburg is a type of Fedora styled Hat. Hmmm….

She Wandered Through The Garden Fence

I like some of the long titles to songs on this LP. You can hear the germ that Genesis grew out of in this song.

The Milk Of Human Kindness

This song features the great blues guitar work of Robin Trower. I love the bluesy feel to this song and it’s a shame they fade out the song while Robin is ripping off a great guitar solo.

The Devil Came From Kansas

Everything about this song is great!  The lyrics, the vocals, the drum work, and most of all the awesome guitar work of Robin Trower.  This is simply great rock-n-roll.  By the way, he’s right about the Devil coming from Kansas.  I dated her in college!

This is Procol Harum at their best! It’s no wonder it is the title cut of two different LP’s. Again we have the feel of A Whiter Shade of Pale. But it’s simply awesome. The art rock feel of this song with the strings and the soaring vocals is fantastic. Once again I can hear the Peter Gabriel era germ of Genesis in this music. Procol Harum was always a trailblazer in the area of “Progressive” or “Art” rock. I could listen to this song ten times in a row!

The nostalgic sound of song relates to it’s title. A Zonophone was one of the first types of record players. RCA Victor eventually bought the company that made the Zonophone and put it on their record label with the phrase “His Master’s Voice”.

Once again great lyrics and great vocals. “And watch as my befuddled brain shines on brightly, quite insane…” Great guitar work from Robin Trower too. “Shine on!!!”

This song has almost a calypso feel. They have that steel drum sound working. Light and airy. Easy to listen to. The opposite of Boredom, really.

This is the original studio version of one of their greatest hits. (Notice on the Album Cover they have the big yellow blot that screams “Including Conquistador”) The version I remember is the one from their great live album “Procol Harum Live”, but it’s great to hear it in it’s original form. Once again the song has great lyrics and is driven by the great guitar sounds of Robin Trower. It has that symphonic art rock sound that they are so famous for.

“Draw your own conclusions..” but I think this is a great song.  As the song says “choose your own examples…”

By this time in the LP it’s pretty evident that the writer of the liner notes is right about the lyrics of Keith Reid. He knew what he was doing. After all he did come up with “…that her face at first just ghostly, turned a whiter shade of pale.” Great guitar work at the end of the song by Robin Trower.

It is ironic that the song is called Pilgrims Progress.  It’s as if Procol Harum has looked “across the pond” to the U.S.A. and adopted the innocent style of The Beach Boys to sing a simple song in the style of the descendants of the Pilgrims.  Of course the Pilgrims wouldn’t have liked this song at all!  It is also ironic that the organ is an almost exact copy of A Whiter Shade Of Pale.  So we end as we began.

As a side note they got their name from a friend’s cat.  The guys’ cat was named Procol Harum.  They liked it and took it.  They never looked in to what it might mean.  Later on people said it was Latin for “Beyond These Things” but the spelling would have had to be different. (Prucol Harum).  So it’s the name of one of their friends cat.  Cool piece of trivia, eh?

So a “Salty Dog” turned out not to be a Salty Dog”,  but in the end,  the taste was just as sweet!

Thanks J.D. for a great Christmas gift!

I taught myself how to play the piano and read music when I was 9 years old. I've been been consumed by music ever since. I majored in Piano performance in College and I still play, although not as well as when I had time to practice 4 -6 hours per day. This blog is about music. Music is the sound track of our lives. All it take is one song, one composition; and we are transported across time and space. I think it was Beethoven that said: "Music is the landscape of the soul."
View all posts by John →
This entry was posted in Rock Music, Vinyl and tagged A Salty Dog, A Whiter Sahde Of Pale, EMI Records, Gary Brooker, Homburg, Keith Reid, MFP Records, Procol Harum, Rbin Trower, Zonophone. Bookmark the permalink.

7 Responses to When is a Salty Dog not a Salty Dog? Procol Harum and Robin Trower…