“Live” All Star album is a Masterpiece… 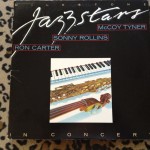 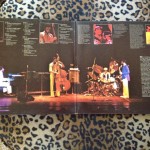 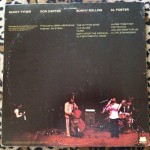 Back Cover of Milestone Jazz Stars In Concert 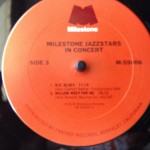 This is the last blog in my series on live albums.  MILESTONE JAZZSTARS IN CONCERT is a fantastic “Live” LP featuring three jazz giants:  McCoy Tyner, Sonny Rollins, and Ron Carter.  They were accompanied on drums by a much younger Al Foster.

This 2 record set documents the 20 concert tour of the “Jazzstars” in the fall of 1978.  McCoy Tyner (Piano), Sonny Rollins (Saxophone), and Ron Carter (Acoustic Bass) each had very different but potentially complementary styles.  They were fascinated by the musical  challenge of working together.  The only reason it was able to be done, however, is because at the time they all recorded on Milestone Records.

The Album features solo’s by Tyner, Rollins, and Carter, as well as songs performed by  duet, trio, and with the entire quartet.

I bought this LP at a garage sale.  I had never heard it before nor did I know anything about this album.  I think I paid 10 cents for it.  I was blown away by the music as well as the sound quality of this record.  Let’s give it a listen…

This song was written by Sonny Rollins and it is performed by the entire quartet.  The announcer is Quincy McCoy, who also helped with staging and lighting.  This song is a tour-de-force of powerful Jazz.  You think the opening riffs of Rollins are amazing and then Tyner takes over!  Then Ron Carter lays a spell on everyone with his bass solo.  This acoustic jazz with the force of fusion jazz.  Rollins returns for an even more inventive solo, never losing any of the rhythmic power of the music.

This song was written by Howard Deitz and Arthur Schwartz.  It was first introduced in a Broadway play called Flying Colors.  The first jazz recording of this song was by Artie Shaw in 1939.  It went on to become a Jazz Standard.  This cut is a duet between Tyner and  Carter.  Tyner’s playing virtuosity defined! The bass at the end by Carter is mesmerizing.  I love the word play of the title.  They are alone, but they are also together. What a great name for a duet.

Saxophone solo written and performed by Sonny Rollins.  This is a truly historic document of a genius at work.  This solo is stunning!  Rollins improvises for over 5 minutes and never bores you or becomes repetitive.  This melody literally is a continuum.  Live in front of an audience he puts to shame every musician who ever tried to improvise a solo.  Everyone from the Grateful Dead to Coltrane must stand in awe of the genius of the man.

This song was written by McCoy Tyner.  It appeared on his album Together, which was recorded and released the same year.  Together was also produced by Orrin Keepnews.  This is an emotional composition that features the entire quartet.  Return to Forever would have been proud to have written this one. Tyner takes us on a 15 minute musical journey that out Chicks – Chick Corea.

This song was written by Ron Carter and features the entire quartet.  Ron Cater has played with everyone from Bill Evans to A Tribe  called Quest.  He may be the most recorded acoustic bass player in history.  This is an awesome jazz-blues number.  About half way through Cater gets his turn to solo and displays the talents that he is so revered for:  creativity, soul, and technique all in one.  I love the slide at the end of his solo that leads back into the main theme.

Willow Weep For Me

Side three of the album is the Ron Cater Side.  He wrote N.O. Blues and then he solos on this song written by Ann Ronell.  This is a brilliant choice for a bass solo.  Once again improvisational skills are at the genius level.

In A Sentimental Mood

This is the Duke Ellington classic that is performed by Rollins and Tyner.  I think The Duke would have loved this arrangement of his classic tune.

Written by and performed solo by McCoy Tyner.  Tyner is again using word play in the title of his song.Pianissimo hints at a combination of the words Piano and Solo yet it’s meaning is quite. Translated literally, the title would mean “a little quiet”.  This composition is anything but small and quiet. It does have the “little pianissimo ”  main theme.  You can sense the spell he put the crowd under because of the slight moment of silence before the applause.

This song is a traditional tune arranged by Sonny Rollins.  The song is performed by the trio of Rollins, Carter, and Foster.  It has that great Brazilian beat.  It takes me straight to the streets of Rio…  You can hear the crowd at several points in the recording and it sounds like a party’s goin’ on…  The Milestone Jazzstars leave them dancing in the aisles.

So where did they go from this tour in 1977?  Since 1996 Al Foster has been touring with his own band.  Ron Carter became a great music educator.  He recently retired from City College in New York where he was a Distinguished Professor of Music.  He currently sits on the board of the Harlem Jazz Music Center.  McCoy Tyner is still going strong.  He has a new album out called “Guitars”.  It features  Derek Trucks, Bella Fleck, Bill Frisell, John Scofiled, and Marc Ribot.  In addition the core band that plays with all of these great guitar players is Jack DeJohnnette, and of course Ron Cater!  Last, but not least is Sonny Rollins.  He went on just a few years later to record some memorable Sax solos on the 1981 Rolling Stones LP – Tattoo You.  Including the great one at the end of the song Waiting on a Friend.  Sonny Rollins has just announced that he, like McCoy Tyner, will tour in 2013.  He just tweeted that details will follow after January 1st.  What a world, what a world…

I taught myself how to play the piano and read music when I was 9 years old. I've been been consumed by music ever since. I majored in Piano performance in College and I still play, although not as well as when I had time to practice 4 -6 hours per day. This blog is about music. Music is the sound track of our lives. All it take is one song, one composition; and we are transported across time and space. I think it was Beethoven that said: "Music is the landscape of the soul."
View all posts by John →
This entry was posted in Jazz Music, Vinyl and tagged Acoustic Jazz, Al Foster, Ann Ronell, Artie Shaw, Bella Fleck, Bill Frisell, Derek Trucks, Duke Ellington, fusion jazz, Jack De Johnnette, John Scofiled, Marc Ribot, McCoy Tyner, Milestone Jazzstars, Milestone Records, Orrin Keepnews, Ron Carter, Sonny Rollins. Bookmark the permalink.