Radiohead is not only the future of Rock, but maybe even the future of music.  I used to tell people that had never head Radiohead that they were the modern Pink Floyd.  The real truth is Radiohead is not like anyone else that has ever been.  This band is so creative and smart there is no telling where they can take music in the future.  Currently the lead guitar player Jonny Greenwood is collaborating  with the avantgarde composer Krzysztof Penderecki.  They did the movie soundtracks to “There Will Be Blood” and “Norwegian Wood”.  They just released a CD on the Nonesuch  label.  The CD is a compilation of works by both musicians.  It was just released on March 13, 2012.  I haven’t heard it yet, but I assure you I will purchase it as soon as possible.  Needless to say this is not the average rock band.  Radiohead is heavily influenced by contemporary “Classical” (for lack of a better word!) composers.  Another cool thing about this band is that they regularly employ some of the very first synthesizers ever invented.  First is the Etherwave Theremin Kit: 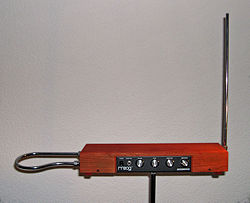 This Synthesizer was invented in 1928 by a Russian Scientist named Theremin. It was first used in Rock-n-Roll by Randy California of Spirit, and Randy introduced it to Jimmy Page of Led Zeppelin, who got a lot of mileage out of it during live performances with Led Zeppelin.

The other synthesizer is called the ondes Martenot.   This synth

esizer was invented in France in 1928.  Radiohead owns two ondes Martenots!  Here are a couple of pictures of the Martenot.  They are very difficult to play and even harder to master.

So on to the show.  My brother Joe went with me.  He is a highly trained and excellent musician. (If I may be so bold as to brag on my brother…).

I have been a fan of this band for years and have always wanted to see them so needless to say I was very psyched for this show.  The opening act was a band called Other Lives.  This band was a real pleasure to see live.  They sounded like a cross between old Peter Gabriel era Genesis, Kate Bush, and with a little Arcade Fire mixed in.  Several of the musicians in the band played different instruments during their 30 minute set.  At various times they had a cello, violin, trumpet, and many different kinds of percussion instruments playing.  The poor bastards were jammed together in front of the giant pile of equipment for Radiohead.  They could hardly move around but they really sounded great!  Then to my surprise, when the lead singer introduced the band, he said they were from Stillwater, Oklahoma!   I would never have guess that.  They sounded English!  Here is a photo gallery of Other Lives on stage at American Airlines Center, in Dallas, Texas.

After a brief intermission the main event began. Here’s a taste of what it was like.

They opened their two hour 24 song set with Bloom from their latest CD called King of Limbs and ended their set with Paranoid Android from their CD called OK Computer.  From the very first song it was apparent I was in for a very special night.  First of all their set included the live debut of two new songs.  The first one came about half-way through their initial set.  It was called The Amazing Sound of Orgy.  The second new song was played during the second encore. (By the way, I’m told that two encore sets from Radiohead is extremely unusual too!)  That song was called Skirting on the Surface.  Both songs were excellent and bode well for the next Radiohead CD.  They also played two other new songs that they have played other places on this tour:  Identikit and Staircase.  They played almost everything I wanted to hear.  Of course they could play all night and I’d still think of a song I wished they had played.  The light show was amazing.  They had 12 giant flat screened televisions that were hung suspended above the stage.  These screens could move up and down and rotate, creating mind boggling effects.  Behind the band was an extremely sophisticated wall of lights that really blew me away.  Here is a photo gallery of pictures I took at the show with my iPhone:

The most interesting thing about the light show, however, was what was not there.  There was not one single spotlight used during the entire show. In all of my life of going to rock concerts (my first show was in 1969) I have never seen a band perform without using spotlights.  The message is obvious and a real insight into the mindset of Radiohead.  Radiohead is a BAND!  The sum is greater than the parts. This band has no Star.  They are truly an ensemble performing their joint compositions.  Really, that is what I love about them.  They are composers not song writers.  They are practicing their art on the highest level.  They could care less if anyone likes it.  They write their music because they have too.  Because their art always comes before their popularity it was very gratifying to see a sold out hero worshiping crowd at the AAC that night.  The future’s so bright I gotta wear shades!

I taught myself how to play the piano and read music when I was 9 years old. I've been been consumed by music ever since. I majored in Piano performance in College and I still play, although not as well as when I had time to practice 4 -6 hours per day. This blog is about music. Music is the sound track of our lives. All it take is one song, one composition; and we are transported across time and space. I think it was Beethoven that said: "Music is the landscape of the soul."
View all posts by John →
This entry was posted in Live Performance Reviews, Rock Music and tagged etherwave Theremin kit, Jimmy Page, Jonny Greenwood, Krzysztof Penderecki, Led Zeppelin, ondes Martenot, Other Lives, Radiohead, Randy California. Bookmark the permalink.

2 Responses to Radiohead fearlessly blazes their own trail… Radiohead live in Dallas March 5, 2012