Rare Copy of a Great Live album from Traffic: “Welcome to the Canteen”…

This LP came to me from the big garage sale collection.  I was very pleased to discover that this copy of “Welcome to the Canteen” is an original German pressing.  There are two versions of this LP.  One is on United Artist Records and identifies the band as Traffic on the spin of the jacket as well as on the back cover.  This version of the LP is very common and is not collectible.

The version I own is on Island Records.  The label is in German. (See The pictures below.)  In addition, the band Traffic is not identified anywhere on the jacket or on the LP label.  It just lists the names of all the band members.  This is how you can tell it is a very early copy of the LP.  The vinyl is heavy and thick, which makes for a quieter surface.  It is very likely 180 gram vinyl which is the highest grade of vinyl made.  Needless to say, the LP sounds terrific.  Here are some pictures of the LP. 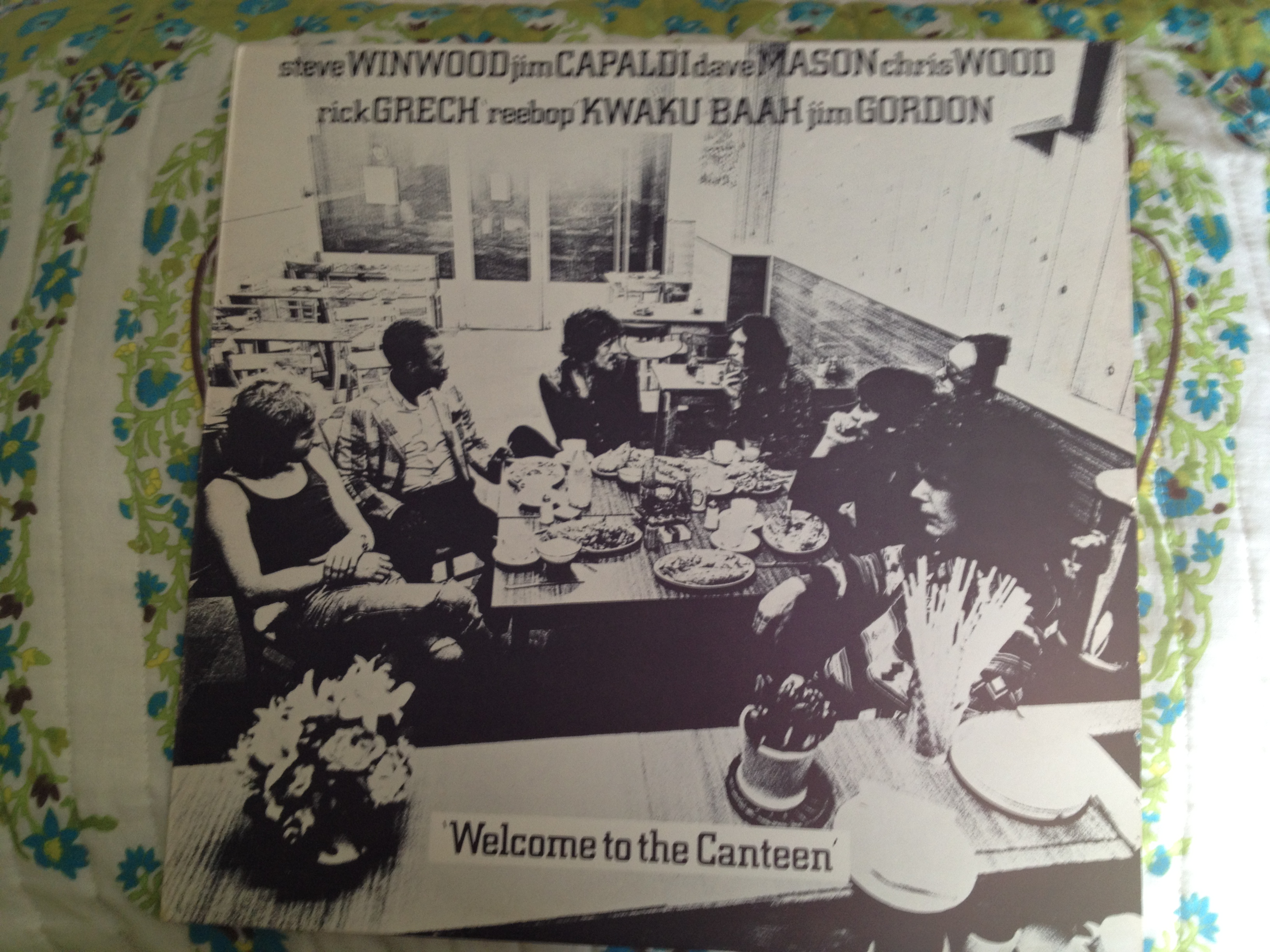 Front Cover of "Welcome to the Canteen"

Back Cover of "welcome to the Canteen" by Traffic

Record Label of "Welcome to the Canteen"

The album was recorded in July of 1971 at F airfield Hall in Croydon, England and the Oz Benefit Concert in London. The band consisted of Steve Winwood, Jim Capaldi, Dave Mason, Chris Wood, Rick Grech, Reebop Kwaku Baah, and Jim Gordon. All of these guys were first rate musicians. This was Dave Masons’ third stint with Traffic and his guitar work is a real stand out of the album. Dave Mason only played six dates on the tour and two of them are recorded on this LP. The Oz benefit concert was a fund raiser for the satirical magazine called “Oz”. The magazine had got themselves into an obscenity lawsuit with the English Government, the fundraiser was for their legal defense fund. Or as Oz called it “The Legal Defiance Fund”.

This song was written by Jimmy Miller and Steve Winwood. It features Steve Winwood on lead vocals.  This cut kicks off the LP nicely!  Steve Winwood sounds great doing his best “Blue Eyed Soul” vocals.  The lead guitar solo by Dave Mason is almost jazz.  This highlights the sophisticated sound that Traffic had.  They blended jazz, soul, rock and blues into their own “Musical Goo”.

Sad And Deep As You

This is just a beautiful song from Dave Mason. Great lyrics too. I love the flute from Chris Wood.
40,000 Headmen

This has always been one of my favorite Traffic songs. It’s almost spooky the way it starts out. Great vocals by Steve Winwood. It’s interesting how Steve is too far from the microphone at times during the performance. The band is extremely tight. They are one with the music. Great Jazzy extended flute solo at the end of the song. This song was written by Jim Capaldi and Steve Winwood. It features Steve Winwood on Lead Vocals.

Shouldn’t Have Took More Than You Gave

Another great song featuring the song writing,vocal, and guitar skills of Dave Mason. I love the organ sound at the beginning. It’s such a classic sound from the early 70’s. Great lyrics too: “…but the dues we have to pay are still the same. You shouldn’t have took more than you gave.”

Side two is the real treat of this LP. These two extended jams on some of their better known songs is just awesome!

This is one of Traffic’s best know songs. Jim Capaldi wrote the lyrics and Steve Winwood and Chris Wood wrote the music. This song was on the very first Traffic LP called “Mr. Fantasy”. It has been a long time staple of FM radio in spite of it’s length. (Thesong is over 10 minutes long.) This live version is paced a little slower than the studio version. It features Steve Winwood on lead vocals. They really thow themselves into this performance and the music just soars! This is a great live version of this song. It’s great how Steve Winwood and Dave Mason trade “clean” and “dirty” guitar solos during this song.

To close the LP Steve Winwood reaches all the way back to his time with The Spenser Davis Group. (Steve was only 17 years old when he hit big with Spencer Davis). This song was written by Spencer Davis, and Steve and Muff Winwood. The original song was only 3 minutes long. This live version comes at you like a freight train for almost 9 full minutes! Get up off of that thing and Dance!!!  The Drummer Jim Gordon is just fantastic. Jim Gordon may be one of the most important musicians in rock history.  He played the drums on Eric Clapton’s great masterpiece Layla and Other Assorted Love Songs.  He also wrote the extended piano coda to the song Layla.  He played drums for Joe Cocker and the Mad Dogs and Englishmen.  He played with Gregg Allman, The Everly Brothers, The Beach Boys, Delainey and Bonnie, Harry Nilsson, Frank Zappa, Steely Dan, Dave Mason, and even Alice Cooper. He is widely known as one of the best drummers in Rock and Roll.  Here is some of his finest work.

Dave Mason left the band for good during this tour.  Traffic continued on in various forms until 1974 when Steve Winwood walked off the stage in the middle of a performance because he was so frustrated with some of the band members drug use.  That was the end of Traffic.  Reebop, Chris Wood, and Jim Capaldi are now dead.  Traffic was inducted into the Rock and Roll Hall of Fame in 2004.  Dave Mason and Steve Winwood still have great solo careers.  So that is all for now from “… the Canteen”.  I think it’s time for a cocktail.  Peace, Out…

I taught myself how to play the piano and read music when I was 9 years old. I've been been consumed by music ever since. I majored in Piano performance in College and I still play, although not as well as when I had time to practice 4 -6 hours per day. This blog is about music. Music is the sound track of our lives. All it take is one song, one composition; and we are transported across time and space. I think it was Beethoven that said: "Music is the landscape of the soul."
View all posts by John →
This entry was posted in Rock Music, Vinyl and tagged Chris Wood, Dave Mason, Fairfield Hall, Island Records., Jim Capaldi, Jim Gordon, Oz Magazine, Richk Grech, Steve Winwood, Traffic, United Artist Records, Welcome to the Canteen. Bookmark the permalink.