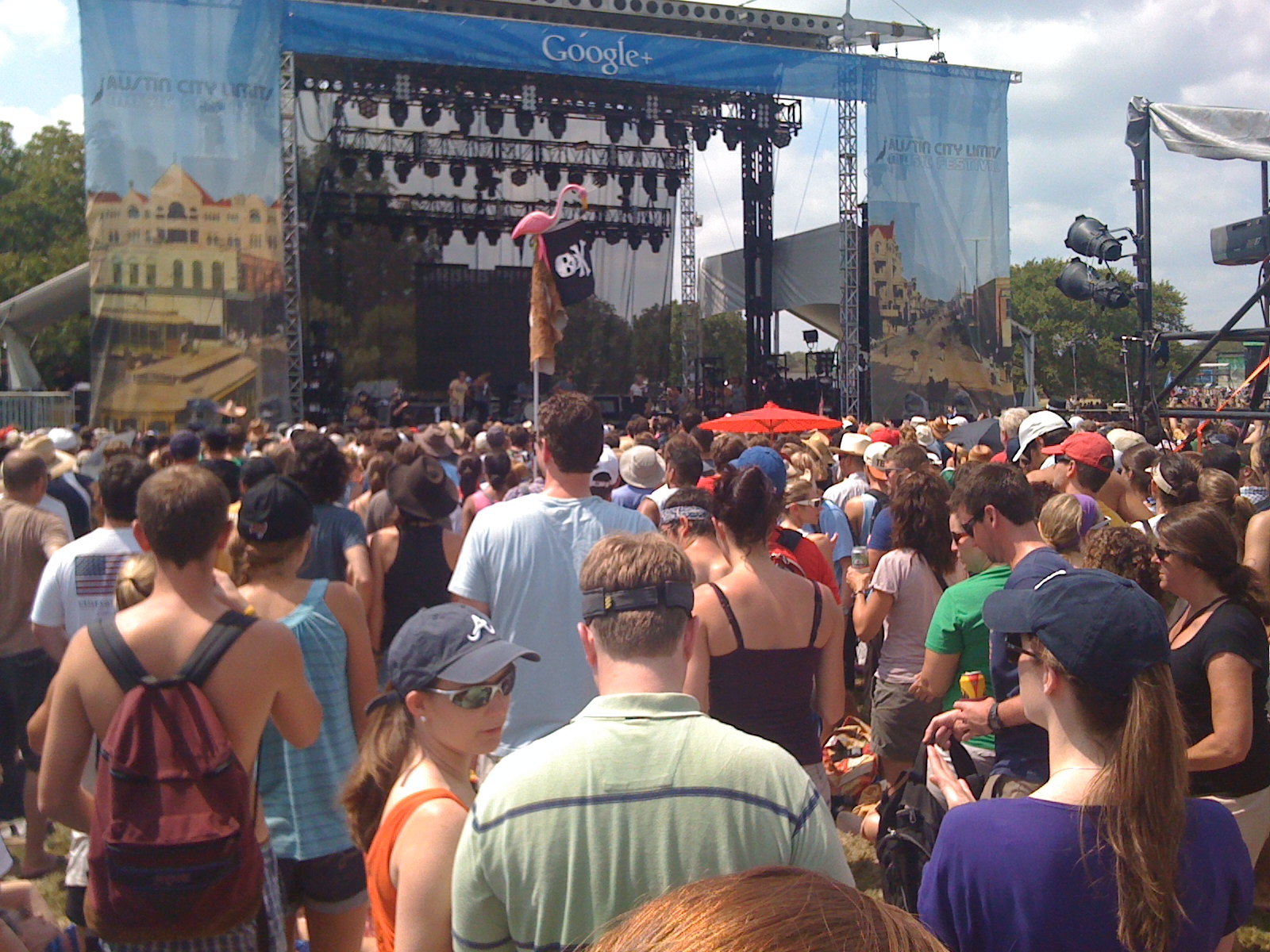 The Head and the Heart performing at ACL 2011

Day three started with breakfast at a great local restaurant in east Austin called “Cisco’s”.  While we were having breakfast one of the bands that we saw perform on Friday came in for breakfast too.  The band was called “Wild Beast”.  They were very nice.  We just told them how much we enjoyed there show and then left them alone.  I’m sure they enjoyed their authentic Tex-Mex breakfast as much as we did.

We got to the concert a little earlier than I thought we would and caught about half the set of another English group called Graffiti 6.  We had not planed to see this group but they were very good.  They sounded kind of Jamiroquai like.  The vocals had a soul edged rock sound to them.  They are about to release their first American single.  They played the song and I liked it.  It sounded kind of like The Spencer Davis Group.

Next up was The Head and the Heart.  There was a lot of pre-show buzz about this band.  They had played South by Southwest earlier in the year, but the venue was really small and very few people got to see them.  A large crowd had assembled to see them this time.  I was very excited about hearing them.  The Head and the Heart are a very Americana sounding band from Seattle Washington.  Their self titled debut album was released by Sub Pop Records.  Band has three main singers who traded off taking the lead vocal on various songs.  Their set started slowly and built to a powerful conclusion.  I really enjoyed this band and highly recommend them.  If you’d like to hear what they sound like live and you have iTunes, you can download a live performance from NPR’s “All Songs Considered”.  Some of the highlights were “Rivers and Roads” and “Lost in my Mind”.  This band has great chemistry with the audience.  The only note I wrote about this performance was “WOW!!”

Back at the main stage we saw a band with the very interesting name of Airborne Toxic Event.  They sounded like a cross between The Clash and Bright Eyes.  The lead singer looked like a tatted up hood but when he spoke to the crowd he was a very kind and thoughtful person.   He dedicated a cover of a song by The Magnetic Fields to his recently deceased Grandparents.  He dedicated another song to our soldiers in Afghanistan and Iraq.  He also did a very cool cover of the Bruce Springsteen song “Fire”.  Immediately after I made a comment to my friend that they sounded kind of like The Clash they covered “Rockin’ The Kazbar”.  They closed their show with a rousing version of “I Fought the Law and the Law Won”. This band had played ACL before and a large and enthusiastic crowd tuned up to see them.

During the intermission I went to get some food and beer.  Every day I at these Grilled Steak Kebabs from Tim Love’s Lonesome Dove Cafe.  The food at ACL is very, very good.   Especially Tim Love’s food.  Here’s a picture of his sign above their booth. 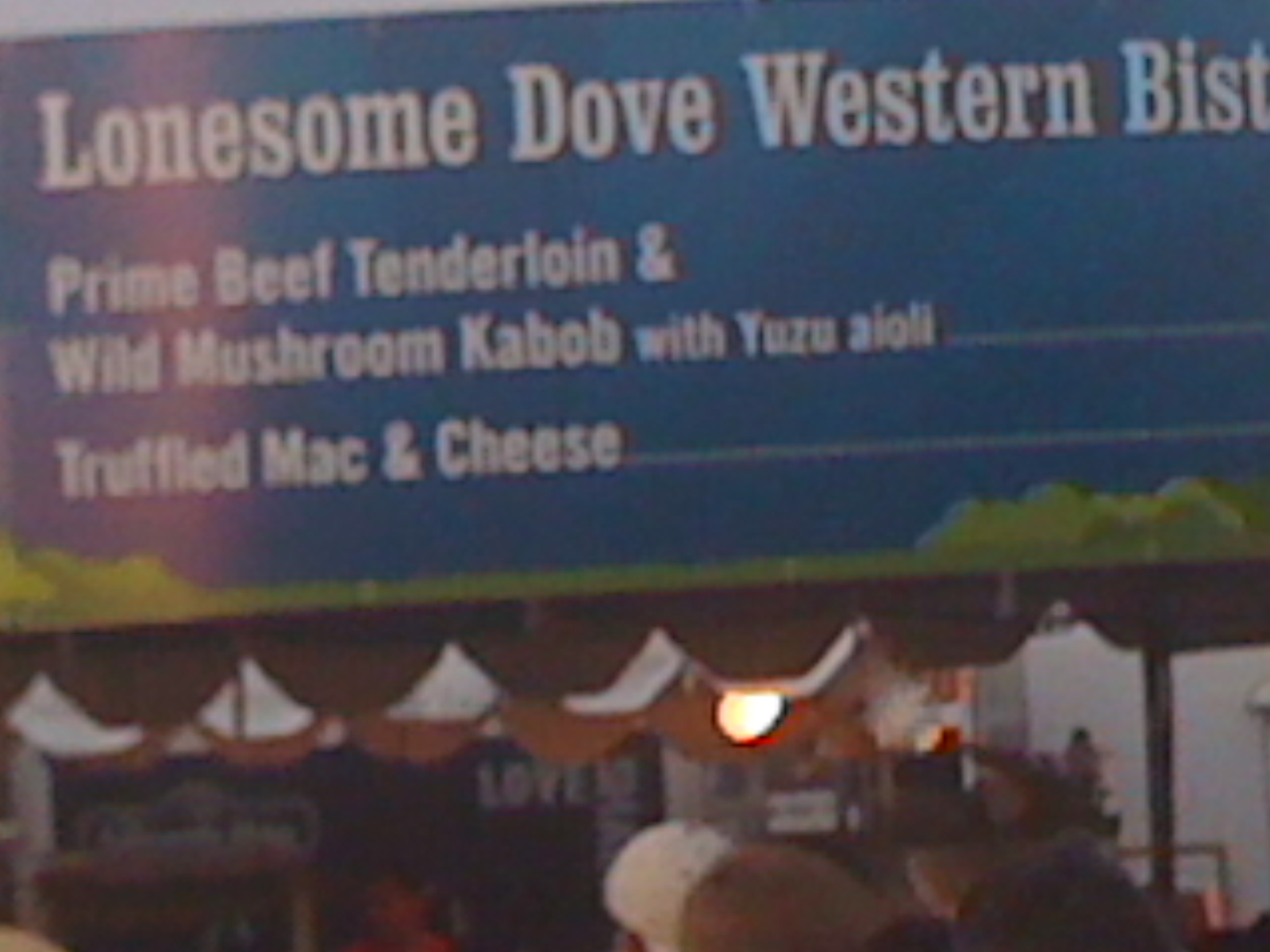 The next band I saw was Broken Social Scene.  This band hails from Canada.  They are great practitioners of Phil Spectors “Wall of Sound”.  There were at least 9 people in the band.  There music soars.  They use a lot of distortion.  They were not afraid to make a lot of noise.  Neil Young would have loved their set.  Late in their set they did a very cool cover of a Modest Mouse song.  I would highly recommend this group.

The sun was beginning to set when Fleet Foxes took the stage.  I have heard of this band for some time and I was very interested in seeing them live.  This set was one of the highlights of the entire 3 day event.  This is a very serious band with highly sophisticated music and harmony. They had as good of harmonies as Crosby, Stills, Nash & Young or The Eagles.  They were every bit as good of musicians too.  What an amazing band!  I loved them.

So that brings me to the end of the show.  The last band standing.  Sunday night September 18, 2011 Arcade Fire burned the house down!  They put on a fantastic show.  They light show was blinding at times.  They are also great practitioners of “The Wall of Sound” .  They remind me of Talking Heads at the end of their career when they did Stop Making Sense.  The lead singer sounds and even has some of the mannerisms of David Bryne.  The woman in Arcade fire that plays all of the different instruments and sings lead vocal on certain  songs, kind of stole the show.  She also got to sing lead on the very last song.  The whole crowd dispersed singing her catchy song.

So there you have it.  Three days of fun and music.  What’s the bottom line?  Well, I thought ACL was extremely well run.  I thought the variety and the quality of the music that was presented was fantastic.  They really have this thing down now in their 10th year.  I highly recommend going.  Register on line and get on the email list.  Next years early bird ticket are already on sale.  The line up has not yet been announced but it doesn’t matter.  I can assure you that it will be well worth the $185.00 ticket price.  I have paid more money to see just  one band.  For the same price I got to see 19 bands. I think they are moving the event to October 14-16 2012.  This is great because it will be much cooler weather than it was this year.   It was an experience I will remember for a long, long time.  So, I say buy a ticket and maybe I’ll see you there next year…

I taught myself how to play the piano and read music when I was 9 years old. I've been been consumed by music ever since. I majored in Piano performance in College and I still play, although not as well as when I had time to practice 4 -6 hours per day. This blog is about music. Music is the sound track of our lives. All it take is one song, one composition; and we are transported across time and space. I think it was Beethoven that said: "Music is the landscape of the soul."
View all posts by John →
This entry was posted in Life Events, Live Performance Reviews and tagged Airborne Toxic Event, All Songs Considered, Arcade Fire, Austin City Limits Music Festival, Bright Eyes, Broken Social Scene, Bruce Springsteen, Cisco's, Crosby Stils Nash and Young, David Byrne, Fire, Fleet Foxes, Graffiti 6, I Fought the Law, Jamiroquai, Lost in my Mind, Modest Mouse, Neil Young, NPR, Phil Spector, Rivers and Roads, Rockin' the Kazbar, South by Southwest, Stop Making sense, Sub Pop Records, Talking Heads, The Clash, The Eagles, The Head and the Heart, The Magnetic Fields, The Spencer Davis Group, The Wall of Sound, Tim Love's Lonesome Dove Cafe, Wild Beast. Bookmark the permalink.