“The Big Man” is now in “The Promised Land” 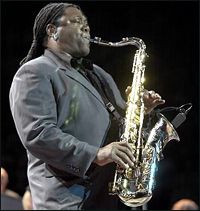 Clarence Clemons on Stage with the E Street Band

Rock ‘n Roll has lost a Giant in every sense of the word.  Clarence Clemons died yesterday of complications from a stroke he had about a week ago.  The E Street Band has lost its heart and soul.  I’m sure they will continue on but to me it’s like when John Bonham died and Led Zeppelin disbanded because they could not imaging playing without him.  Can you image Bruce Springsteen on stage without his pal?

Clarence had a unique “do wop”  R & B style that is so unique it could never be duplicated.  and his sound was huge like the man it came from.  Clarence was one of the oldest members of the band and played on every album all the way back to their first LP:  “Greetings From Asbury Park”.  His Sax solo’s are the trademark of many of the E Street Bands biggest songs.  “Spirit in the Night”, “Thunder Road”, “Born to Run”, and on and on it goes…  Clarence was only 69 years old.  I for one will miss him.
There are many versions of the story of how Clarence Clemons met Bruce Springsteen.  But here is the story straight from Clarence himself:  “ One night we were playing in Asbury Park. I’d heard The Bruce Springsteen Band was nearby at a club called The Student Prince and on a break between sets I walked over there. On-stage, Bruce used to tell different versions of this story but I’m a Baptist, remember, so this is the truth. A rainy, windy night it was, and when I opened the door the whole thing flew off its hinges and blew away down the street. The band were on-stage, but staring at me framed in the doorway. And maybe that did make Bruce a little nervous because I just said, “I want to play with your band,” and he said, “Sure, you do anything you want.” The first song we did was an early version of “Spirit In The Night”. Bruce and I looked at each other and didn’t say anything, we just knew. We knew we were the missing links in each other’s lives. He was what I’d been searching for. In one way he was just a scrawny little kid. But he was a visionary. He wanted to follow his dream. So from then on I was part of history.”
He is indeed part of history.  Here is my favorite example of his art.  The song “Jungleland”  a 10 minute plus tour de force with an extended Sax solo in the middle.  At one point you think the solo is coming to an end but then “The Big Man” soars again and again.  When mear mortals ran out of idea’s he was just getting started.  Listen and enjoy.  Please send your comments.  What is your favorite Clemons solo?

I taught myself how to play the piano and read music when I was 9 years old. I've been been consumed by music ever since. I majored in Piano performance in College and I still play, although not as well as when I had time to practice 4 -6 hours per day. This blog is about music. Music is the sound track of our lives. All it take is one song, one composition; and we are transported across time and space. I think it was Beethoven that said: "Music is the landscape of the soul."
View all posts by John →
This entry was posted in Life Events and tagged Bruce Springsteen, Clarence Clemons, Jungleland, The E Street Band. Bookmark the permalink.