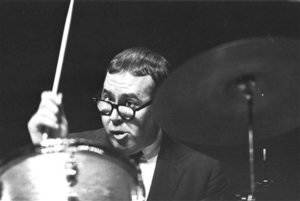 Jazz great Joe Morello passed away March 12, 2011.  He performed on over 120 records, half of which were with the Dave Brubeck quartet.  He joined the quartet in the middle of a concert tour with the idea that he would just fill in for 2 months.  The year was 1955.  He stayed for 12 years and was the drummer on Brubeck’s best known recordings.

Among the cuts that he performed on was”Take 5″, the most well known jazz recording of all time.  This is a “Live” recording of Take 5:   Dave Brubeck – 01 – Take 5 Take 5 is one of the best cuts on the great album “Time Out”.  Other great cuts were “Blue Rondo Ala Turk”   Blue Rondo A La Turk and “Kathy’s Waltz” Dave Brubeck – 07 – Kathy’s Waltz The entire album is a must have.  I am privileged to own in on Vinyl.

There’s not much to say except that the world has lost a giant of the Jazz world and I for one am glad that I got to enjoy his musicianship while he was here.  God Bless, Joe Morello, his family, and loved ones. 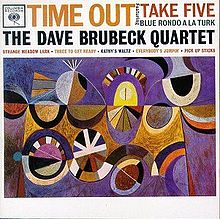 Time Out - The Dave Brubeck Quartet

I taught myself how to play the piano and read music when I was 9 years old. I've been been consumed by music ever since. I majored in Piano performance in College and I still play, although not as well as when I had time to practice 4 -6 hours per day. This blog is about music. Music is the sound track of our lives. All it take is one song, one composition; and we are transported across time and space. I think it was Beethoven that said: "Music is the landscape of the soul."
View all posts by John →
This entry was posted in Life Events and tagged "Take 5", Dave Brubeck, Jazz, Joe Morello, Paul Desmond. Bookmark the permalink.

2 Responses to Beat the Drum Slowly…