I am very saddened to hear that Aretha Franklin,
The Queen Of Soul; may have Pancreatic cancer. She is a national treasure.
It’s just one more crappy thing that happened in 2010 if it’s true. One
of my best friends was diagnosed with Pancreatic cancer in
September of 2009. He is still fighting with all his might
and I hope Aretha will follow his example. So it seemed
appropriate to listen to a couple of Aretha’s LPs this new year’s
eve. The two LPs were “Aretha’s Greatest Hits” (Atlantic SD-8295)
copyright 1971, and “Aretha” (Arista Records AL8442) copyright
1986. I listened to them in chronological order. Very
interesting to listen to two records back to back that were
recorded 15 years apart by the same artist. First the greatest
hits. I know what you’re thinking…”How many times can you
listen to Aretha sing “Respect?” Right? The answer for me is
there is no limit! The LP was in very good shape after
cleaning. I was surprised because the record was not in a
liner sleeve. Here is the song order for Side one: 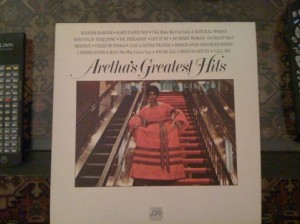 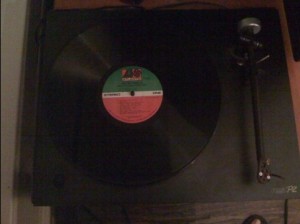 The cuts that seem to stand out the most
were the ones that were produced by Jerry Wexler alone.
Jerry seemed to stay the truest to the soul sound that I love when
I listen to Aretha. Dr. Feel Good and Baby I Love You are
real stand outs. If I could sing a song to Aretha I’d sing that
opening chorus arrangement of “Bridge Over Troubled Water”
“…Don’t trouble the water why don’t cha, why don’t cha Let It Be?
Still waters Run Deep… Like a Bridge over troubled water I
will lay me down” She turns the song inside out and makes it her
own. Tough thing to do with a song that familiar. There’s not
that much more to say about this album. It is classic
Atlantic R & B Soul.   The cut “Don’t Play That Song” was actually written by the founder of Atlantic Records and Rock-nRoll Hall Of Famer Amet Ertegun along with Betty Nelson.  Also, many don’t know that “Respect” was written and performed first by the great Otis Redding.  If you haven’t heard the original you really should check it out.

“Aretha” is another matter all
together. Here are the cuts in order: Side1: 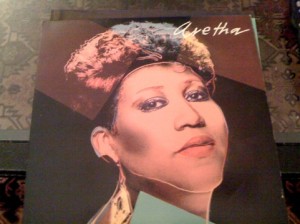 This is one of
those attempts to update a sound that doesn’t need updating.
There is a very bad duet with George Michael “I Knew You Were
Waiting (For Me). Also a duet with Larry Graham “If You Need
My Love Tonight” Equally 80’s boring. The band is a who’s who type
of line up that includes Kenny G., and Randy Jackson (American
Idol) as well as Chuck Leavell, Ron Wood and Keith Richards, and
Steve Jordan. Chuck has played with everyone from the Almond
Brothers to Eric Clapton and the Rolling Stones. Steve Jordan
has played in Keith Richards band “The X-pensive Wino’s as well as
Ron Wood’s solo album ‘Slide on This” This album becomes the Disco
Future vs. The R & B past. Aretha produces two
cuts. One of the Aretha produced cuts is “He’ll Come
Along”. She learned a lot from Jerry Wexler.
This is classic Atlantic R & B sound. The stand out gem of
the record is the Keith Richards produced cut of the Rolling
Stone tune “Jumping Jack Flash.” Aretha plays the piano
and does the vocal. This is an awesome performance! One
last thing about this album: It had hardly been played.
It was in almost perfect condition.

I taught myself how to play the piano and read music when I was 9 years old. I've been been consumed by music ever since. I majored in Piano performance in College and I still play, although not as well as when I had time to practice 4 -6 hours per day. This blog is about music. Music is the sound track of our lives. All it take is one song, one composition; and we are transported across time and space. I think it was Beethoven that said: "Music is the landscape of the soul."
View all posts by John →
This entry was posted in Vinyl and tagged Aretha Franklin, Atlantic Records, Jumpin' Jack Flash, Keith Richards, Ron Wood. Bookmark the permalink.